You will find here details of the books that use KITAB’s datasets, both in press and in progress. 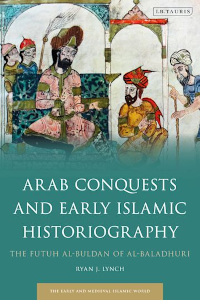 Of the available sources for Islamic history between the seventh and eighth centuries CE, few are of greater importance than al-Baladhuri’s Kitab Futuh al-buldan (The Book of the Conquest of Lands). Written in Arabic by a ninth-century Muslim scholar working at the court of the ‘Abbasid caliphs, the Futuh’s content covers many important matters at the beginning of Islamic history. It informs its audience of the major events of the early Islamic conquests, the settlement of Muslims in the conquered territories and their experiences therein, and the origins and development of the early Islamic state. Questions over the text’s construction, purpose, and reception, however, have largely been ignored in current scholarship. This is despite both the text’s important historical material and its crucial early date of creation. It has become commonplace for researchers to turn to the Futuh for information on a specific location or topic, but to ignore the grander – and, in many ways, more straightforward – questions over the text’s creation and limitations. This book looks to correct these gaps in knowledge by investigating the context, form, construction, content, and early reception history of al-Baladhuri’s text.

This study is the first published monograph to make use of KITAB’s text reuse data.

The team have a number of books in progress, check back here for news of latest publications.

The ERC team, Memories, books, communities: Making and re-making the past in the Arabic textual tradition

Using traditional and digital methods, this volume co-written by the KITAB team explores how memories were communicated, circulated, and exchanged in the medieval Islamic world. It questions how the recombination of previous texts in new textual forms tell us about the ways in which groups defined themselves, and how groups, through texts, negotiate their shared pasts.

This monograph sets an agenda for the study of text reuse in Arabic and Islamicate languages. It provides a typology of text reuse and a survey of KITAB’s data, documenting thousands of relationships across a corpus of about 2 billion words. Based on case studies, the author delves into authorial practices that involved recycling in Iraq, Syria and Egypt and that yielded new written forms. The author’s final argument centres on the need to reconsider the very concept of “the book” in the period.

Maxim Romanov, A Digital Humanities for Arabic and Islamic Studies